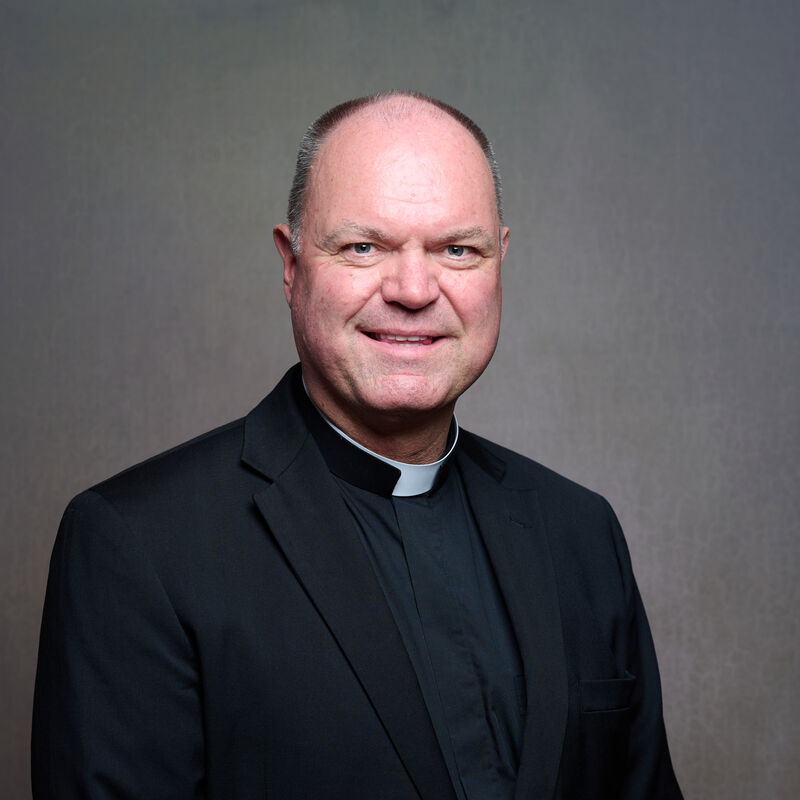 Fr. Blaise Berg was born the ninth of twelve children in Yuba City, California.  During his summer vacations in high school, he worked part-time in the fields of Sierra Gold Nurseries, a wholesale fruit and nut tree nursery that his father had founded in 1951.  After high school, Blaise attended the University of San Francisco.  In 1983, he completed a B.A. degree in philosophy and theology and received a certificate of completion from the St. Ignatius Institute, a great books program.  Two years later, he attended Cal Poly, San Luis Obispo, to obtain an M.B.A. specializing in agribusiness.  After completing his M.B.A. studies in 1987 and working as a cross country truck driver for almost a year, he joined his father on the management staff of the tree nursery.  During this period of his life, he more seriously discerned a vocation to the consecrated state and the priesthood.

In early 1991, Blaise was accepted to the Casa Balthasar, a house of formation and discernment in Rome, Italy.  In the summer of 1994, nearing completion of his time of formation at the Casa Balthasar, he was accepted into the priestly formation program for the Diocese of Sacramento.  After a pastoral year, he returned to Rome for more formation at the Pontifical North American College and further studies.  He was ordained to the transitional diaconate in St. Peter's Basilica with his classmates in October 1997 and was ordained to the priesthood in June 1998 at the Cathedral of the Blessed Sacrament in Sacramento.

Upon completing his studies in 2000, Fr. Berg returned from Rome and was assigned as Parochial Vicar at St. Rose Parish, Roseville.  In February 2002, Bp. William K. Weigand appointed Fr. Berg Secretary to the Bishop and Vice-Chancellor.  In July 2006, Fr. Berg began a six-year assignment as the Director of the Newman Center at Chico State University.  In January 2008, Bp. Weigand appointed Fr. Berg pastor of St. John the Baptist Parish in Chico in addition to fulfilling his duties at the Newman Center.  In 2012, Bp. Jaime Soto appointed Fr. Berg as Episcopal Vicar for Clergy.  Having completed his term in June 2016, Fr. Berg was named Pastor of St. Mary's Parish in Vacaville, California, where he presently serves.

In addition to his various assignments, Fr. Berg has served as chaplain for Rachel's Vineyard retreats since 2004 and has served on several diocesan boards, committees, and councils.  Since 2003, he has been a board member of the California Association of Natural Family Planning and currently serves as its President.

God’s Design for Married Love, The Pastoral Applications of NFP: Creating a Parish Culture that is Life Giving and Love Giving, Presentation to Permanent Deacons, Diocese of Sacramento, May 30, 2020

Fatherhood: The Vocation of All Men, Presentation, Men’s Conference, Diocese of Oakland, November 15, 2008

“How does a priest treat the sin of voluntary sterilization within the celebration of the Sacrament of Penance?”  Clergy Corner, CANFP News, Mar 2013

“Spiritual Fatherhood of the Priest and of the Husband/Father”, Clergy Corner, CANFP News, Nov 2007